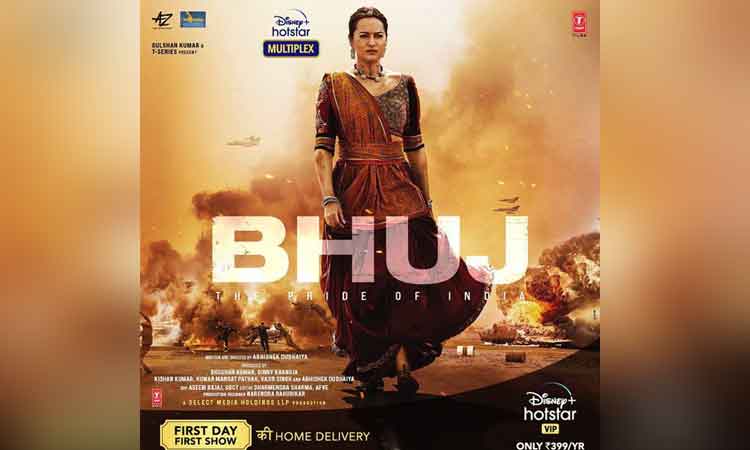 Since the war drama movie ‘Bhuj: The Pride of India’ is making rounds, fans are eagerly awaiting to know more about it. Actor Ajay Devgn today shared the first look of Sonakshi Sinha from the film. Unveiling the look Ajay depicted the role of Sonakshi as Sunderben Jetha Madharpaya from the film. He also stated that the crucial history will reveal soon on Disney + Hotstar Multiplex.

Ajay on his Instagram wrote, “Here is the first look of Sonakshi Sinha as Sunderben Jetha Madharparya, the brave social worker who took 299 women along with her to support the Indian Army! #BhujThePrideOfIndia a crucial incident from History will unveil soon with #DisneyPlusHotstarMultiplex on @disneyplushotstarvip

Bhuj: The Pride of India is set against the backdrop of the Indo-Pak war in 1971. In the movie, Ajay Devgn essays the role of Squadron Leader Vijay Karnik who persuaded 300 women from a village in Madhapur in Gujarat to reconstruct the air-strip during the war so that Air Force officers could land safely.

Sunderben Jetha Madharparya, played by Sonakshi, helped Vijay and got the runway constructed.

Parineeti Chopra plays the role of an Indian spy in the movie. Ammy Virk, Sharad Kelkar, and Pranitha Subhash will also be seen in pivotal roles.

Hansika Motwani Extends Her Support To Legacy Of Lies