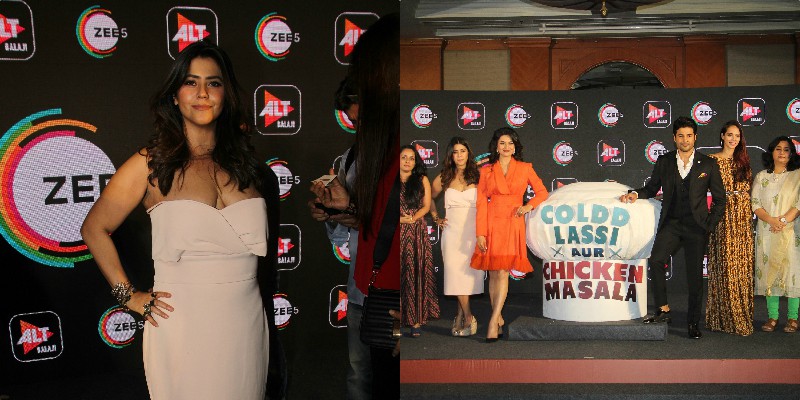 National, Aug 16, 2019:  ALTBalaji and ZEE5, the two OTT industry giants recently announced a content alliance, where they will co-create 60+ originals. Following the announcement, the OTT platforms today launched the trailer of two Originals – Coldd Lassi Aur Chicken Masala and Mission Over Mars (M-O-M).These co-created Originals will be available on both platforms, further bolstering their content library. The trailers were launched at a high-octane press conference in the presence of ContentCzarina Ekta Kapoor and ZEE5 Programming Head, Aparna Acharekar. Adding a dose of glamour were popular actors from both shows – Divyanka Tripathi, Rajeev Khandelwal, Sakshi Tanwar, Mona Singh, Nidhi Singh and Palomi Ghosh.

Starring heartthrob Rajeev Khandelwal and the reigning queen of television Divyanka Tripathi, Coldd Lassi aur Chicken Masala is a story of two aspiring Chefs- Nitya and Vikram. The trailer gives a sneak peek into their lives as they fall in love but get separated due to circumstances. The trailer successfully builds curiosity among viewers, while momentarily showcasing their recipe of love which is infused with love from the past and hatred from the present. Their crackling chemistry sure promises a delicious treat but leaves a thousand questions unanswered. Why do they fall apart? … Will they be able to resist the conspicuous attraction? The series produced by Doris De and Suhail Zaidi of Linga Bhairavi Devi Productions will see two iconic faces from the television industry coming together to create magic in the digital space. The show also features actors Barkha Sengupta, Maninee Mishra, Navniit Nisshan andPriyanshu Chatterjee in pivotal roles.

Mission Over Mars (M-O-M) is a fictional adaptation of real-life heroes at ISRO who worked on Mangalyaan and played pivotal roles in making the mission a success against all odds. The web-series charts out the journey of M-O-M from inception to execution and will be a moving story of the faith and determination of four lady-scientists who aid ISA (Indian Space Agency) to overcome insurmountable technical and financial challenges as well as  time pressures to mount the successful mission over mars. They not just make the whole nation proud, but also place India ahead of many other countries on the map. In the process, they conquer their own inward imperfections, making for an inspirational story.  This series is certain to inspire people across the globe that ‘Nothing is impossible.’ The show stars some of the most prolific actors Sakshi Tanwar, Mona Singh, Nidhi Singh, Palomi Ghosh in lead roles, along with veteran actors Ashish Vidyarthi and Mohan Joshi in prominent roles. Directed by ace filmmaker Pradeep Sarkar, the web-series is produced by Endemol India.

Ekta Kapoor, Joint MD, Balaji Telefilms said, From the event “Zee and Balaji have been collaborating for close to 25 years. With Zee’s expertise in choosing the best scripts and ALTBalaji’s insights into audience preferences, this is a collaboration based on mutual trust and faith in each other. Having two of the biggest homegrown OTT platforms collaborating to co-create content, we are sure to cover the A to Z(ee) of entertainment genres and cater to all preferences. And there are no better shows than Coldd Lassi Aur Chicken Masala and M-O-M to kick off this collaboration as both are close to my heart! We have been working on M-O-M for over 3 years, to showcase the inspiring story behind the ladies who helmed India’s historic Mars mission.

And Coldd Lassi aur Chicken Masala with two of the biggest stars on Indian Television coming together for the first time, in never before seen avatars, is equally special for me!  “Aparna Acharekar, Programming Head, ZEE5 said, “Aparna Acharekar, Programming Head, ZEE5 India said, “With Coldd Lassi Aur Chicken Masala and Mission Over Mars, we take the first step towards strengthening our association with ALTBalaji. 2019 has been a great year so far with us having clocked in some of our biggest successes this year – The Final Call, Abhay, Kaafir, Barot House and many more. We believe that both these shows will keep the success run going, as also bring a new set of audience to the platform. We are seeing a huge uptake among youth for movies and shows that instill pride for the country, and M-O-M. will be the perfect show for them; Romantic stories told beautifully have always been a winner for Indians and that assures us that Coldd Lassi Aur Chicken Masala will be a winner. Through this association with ALTBalaji, we believe we will be able to bring a robust portfolio of engaging content to our subscribers the world-over.”

On his new digital outing, Rajeev Khandelwal said, “Coldd Lassi Aur Chicken Masala is a sweet and spicy romantic story which will surely grip the attention of the audience. The show portrays the challenges in a relationship and is beautifully written and shot. We went through special training to prep for the role under the guidance of established chefs, where we tried to pick-up the fine art of chopping, cooking and arranging.  It’s a perfect blend of love and hate topped with drama against the backdrop of food. I really hope the audiences shower their love on us.”

On her digital debut, Divyanka Tripathi Dhaiya said, “I couldn’t have asked for better platforms than ALTBalaji and ZEE5 for my digital debut. I have been a part of Ekta’s shows and this is yet another opportunity to thank her for. My character in the show is very different from what I have done in the past and I am really excited about it. We recently released the teaser of the show and the response received in just three days since the launch is absolutely overwhelming.”

On Mission Over Mars, Sakshi Tanwar said, “I feel proud to be a part of this project and would like to thank Ekta for giving me this opportunity. The web-series not only celebrates the tremendous achievement of our nation but also the sheer hard work, grit and determination that these wonderful women scientists put into making it a success. Mona and I have known each other for years and for the first time we got an opportunity to work together on-screen. My experience of working with such a wonderful cast and crew was totally amazing and I hope the audience likes me as Nandita Hariprasad.”

With 42 Originals as part of its vast and diverse, multi-genre content library, ALTBalaji continues to entertain the audiences like never before. Shows like ‘Apharan,’ ‘Home’ ‘The Test Case’ ‘Kehne Ko Humsafar Hain,’ ‘PuncchBeat’ have received adulation and accolades aplenty from across the length and breadth of the country. ZEE5 is India’s fastest growing OTT platform with over 100,000 hours of content. In 2019 itself, it has rolled out around 25 original shows across genres, and the platform is committed to launching 72+ Originals by March 2020. It has crossed 50 million gross downloads since launch on the Play Store and had 76.4 million monthly active users globally in June 2019.

So, fasten your seat belts and get ready for a double dose of entertainment this September.