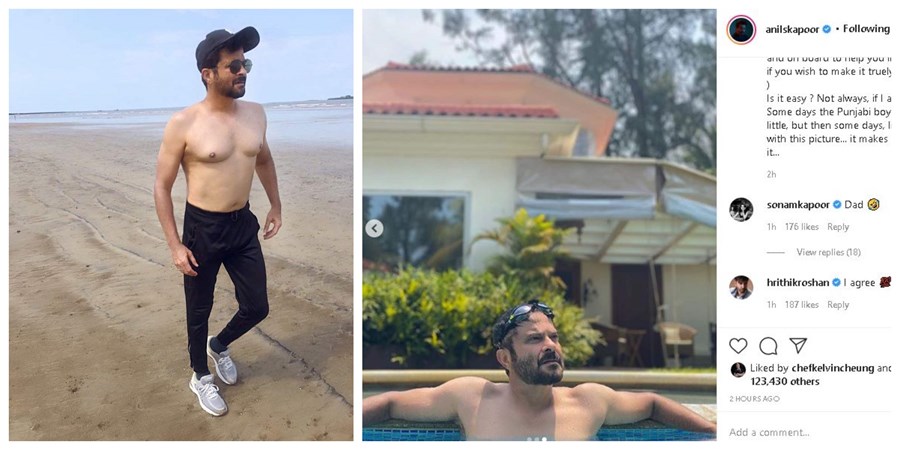 Actor Anil Kapoor posted a few shirtless pictures of himself on social media on Wednesday. ‘Nayak’ actor, who is 63 year old took off his shirt and posed by the beach and in the pool, showing off his tones physique. In his post, Kapoor wrote about food being his biggest weak point and how the entire Kapoor family is working together to regulate his eating habits.

On Instagram, Anil Kapoor often shares secrets of his work-out routine. After all, he is a true blue example of age is just a number.

Taking to his Instagram handle, Kapoor began the post with, “This papa doesn’t preach, just removes his top and walks to the beach.” He posted three photos, two from the beach and one in which he is chilling in a swimming pool. He wrote about the challenges of chasing fitness, especially being a Punjabi who loves food. He credited his family for supporting him in his health goals. It was during the lockdown that he decided to pursue a sharper look.

He wrote, “Everyone has a weak point. Mine is food. The Punjabi boy in me needs the taste buds ignited, my eyes always bigger than my belly. During lockdown, I have set myself the task of achieving a new sharper look. This new look needs a new approach to eating. Both Harsh and my trainer Marc have taken it upon themselves to remind me constantly and lay down eating plans. I try and I battle. Sometimes I even fall. And what I’ve learnt through it all is that a chain is only as strong as it’s weakest link. So everyone in the house had to get involved. From those who kindly cook my food to the support of my family gathered round me at meal time.”

He added, “Fitness is never a one man/ women crusade, it’s about support and encouragement when we need it the most. (Always get family involved and on board to help you in any diet if you wish to make it truly a success) Is it easy? Not always, if I am honest. Some days the Punjabi boy sulks a little, but then some days, like this day with this picture… it makes it all worth it”.

He is next will be seen onscreen in Sanjay Gupta’s crime action thriller ‘Mumbai Saga’ and Karan Johar’s historical period drama film ‘Takht’ with an ensemble cast.