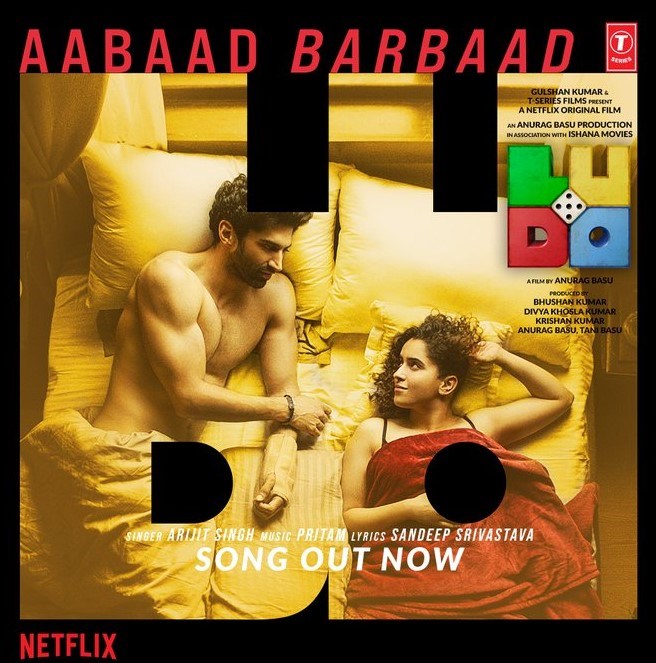 Actress Sanya Malhotra, who next will be seen in a Netflix film ‘Ludo’ shared the first song named ‘Aabaad Barbaad’ from her upcoming dark comedy film on social media on Wednesday. The romantic track is composed by Pritam, sung by Arijit Singh and written by Sandeep Srivastava.

Sharing the song on her Twitter handle, Sanya wrote, “Our crazy love story is out in the open now! #AabaadBarbaad the first track of Netflix’s #Ludo is out on T-series’ Youtube Channel! @juniorbachchan #AdityaRoyKapur  @RajkummarRao @TripathiiPankaj @fattysanashaikh @Pearle_Maaney”.

Sanya Malhotra is paired opposite Aditya Roy Kapur in the film. The latest song from the film captures romantic moments between their characters. The song also features Rajkummar Rao, Fatima Sana Shaikh, Abhishek Bachchan, Inayat Verma, Pearl Maaney and Rohit Suresh Saraf. It shows their character’s journey in the film.

‘Ludo’ is about four different stories tied together by unavoidable circumstances and coincidences far beyond our understanding, all of which make up for a crazy caper of a film.

The film is slated to release on 12th November on Netflix.

Apart from ‘Ludo’, Sanya Malhotra will also feature in Umesh Bist’s comedy drama film ‘Pagglait’. The film revolves around a young girl who discovers her purpose and identity amidst looming questions about love and belonging in the neo-modern small-town India.