Are Flamingo’s Egg Yolks And Egg PINK In Color?

Naturally, pink is a beautiful color but God has created a whitish-pink bird known as Flamingo. The name of the bird comes from the Spanish word “flamenco” which literally means fire and in turn, refers to the bright pink or orange color of the feathers. There are six different species of flamingo such as greater flamingo, Chilean flamingo, lesser flamingo, Caribbean flamingo, Andean flamingo, and puna flamingo.

The surprising fact about flamingo is that greater flamingos on the coast of Namibia have appeared to know when the rains are due in the usually dry Etosha Pan which lies 500 km away. It is too far away to see the lightning or hear thunder though. It is possible because the birds are sensitive to the minuscule drops in barometric pressure which thus signal the oncoming of rainfall. The weather sense of flamingos and other such birds is truly an enigmatic one as that of the magnetic sense. 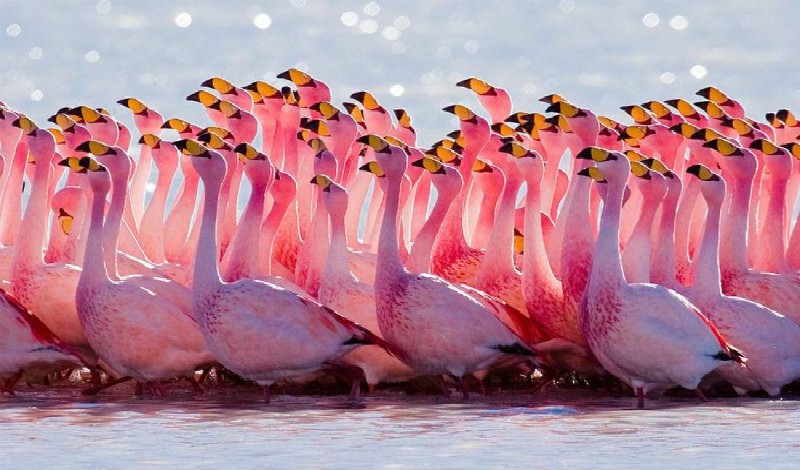 Why are flamingo feathers pink? Well, the bright color of flamingo feathers is due to the presence of carotenoid pigments found in the algae and crustaceans that make up the diet of a flamingo. When it comes to the topic of this article, “Are flamingo egg yolks pink?” the explanation is here. Flamingos are pink on the inside too and these vibrantly colorful birds are adapted to collect and metabolize carotenoid pigments. It is due to the chemicals found in algae, crustaceans and microscopic plant materials that form the flamboyant tones of orange, red, yellow and pink.

The striking pink color is Sure in a flamingo’s plumage where the carotenoids spread further. So, the color of the skin and blood of the bird are truly is pink but when it comes to egg yolk and egg, it is not pink in color. It is claimed as just a rumor and is untrue because people might believe it as some photos exhibit the pink color of the egg yolk which cent percent photoshopped.

The true color of flamingo’s egg yolk and egg is as that of the chicken itself. The powerful pinkest birds have the highest status as the bright color in the colony which also exposed that a particular individual is strong and good at finding food resources. There are as many researchers done about these pink birds which are worth-knowing.

9 Best Oils You Should Try For A Perfect Complexion

Astounding Health Benefits of A Cheerful Glass of Whiskey!