Bhumi Pednekar On A Pilgrimage In Her Village Pedne In Goa 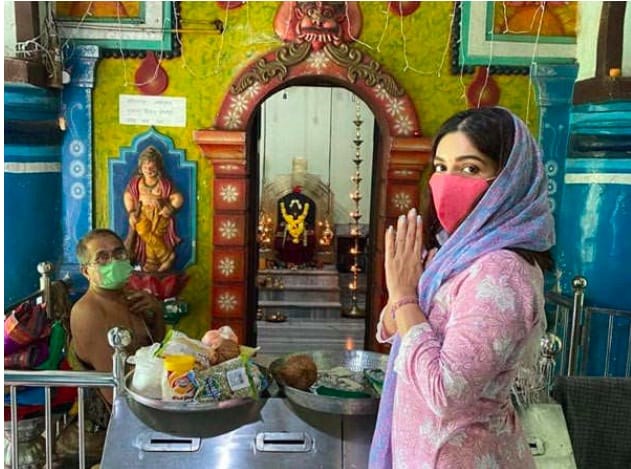 The world is resuming back to normal and people are travelling once again. After a big lockdown, everyone wants to feel rejuvenated and what better way to visit one’s ancestral place. Actress Bhumi Pednekar is currently holidaying in her village Pedne in Goa and the actress did a temple pilgrimage during her stay there.

Sharing the photos from her visit to the three temples, she wrote, “We did a pilgrimage in our village called Pedne. The pilgrimage is made up of 3 temples- Mauli Devi, Bhagwati Devi & Ravlnath Temple all are around 300 to 400 years old. The Pednekar’s, our earliest written record is in the books of the Ravlnath temple from the year 1902. The temples are full of stories, surrounded by medicinal streams of water and tons of energy to heal. Every trip back there teaches us so much. Grateful for our cultural enriched lineage. Peace, Strength and Joy #PednekarFromPedne #Gratitude”

The actress shared several photos of the 3 temples. She even shared a picture of her home in the village. The tranquillity and calmness of the place is exuding in these pictures.

On the work front, Bhumi’s next film ‘Dolly Kitty aur Woh Chamakte Sitare’ is all set to release on 18th September on Netflix. The trailer of this comedy satire starring Bhumi and Konkana Sen Sharma released recently and is loved by the audience.

The film also stars Vikrant Massey and Amol Parashar in prominent roles. It is directed by Alankrita Shrivastava and produced by Ekta Kapoor and Shobha Kapoor. This will be the first film from Ekta’s production which is going to release on Netflix and not on her personal OTT Platform ALTBalaji.

She will also be seen in ‘Durgavati, a horror-thriller film which is a remake of 2018 Telugu film Bhaagamathie. Bhumi will essay the role of an IAS Officer in the film. Film is directed by G. Ashok and produced by Bhushan Kumar, Akshay Kumar and Vikram Malhotra under T-Series, Cape of Good Films and Abundantia Entertainment.