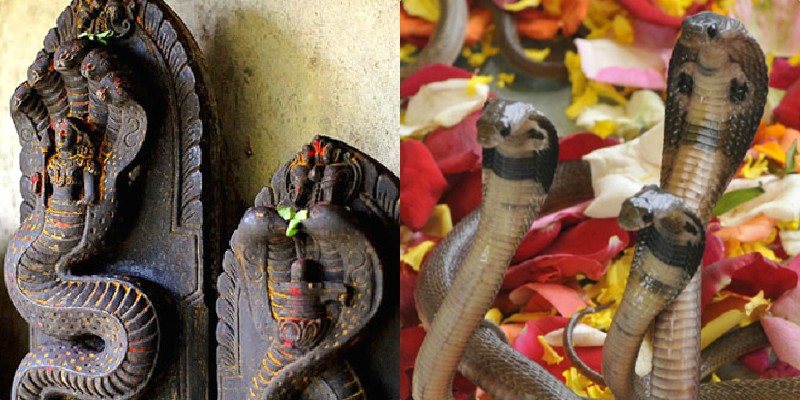 Naga Panchami is a traditional worship of snakes observed by Hindus throughout India, Nepal and other countries. This worship is offered on the fifth day of the bright half of Lunar month of Shravana month (July/August), according to the Hindu calendar.  On this day, the deity of serpents made of stone, wood, silver or painting is given a religious bath with milk.

On this day many people fast and by doing so they believe there will be sure protection against the fear of snakebite. In many parts of India, real snakes are worshipped and they are fed with milk. In a few locations, today people do not dig the earth as they feel that it would kill the living snakes.

In villages, ant-hills, where the snakes are believed to reside, are worshipped. Milk is poured into the hole of the anthill as an oblation to the snake god. Doors and walls of houses, outside, are painted with snake pictures and mantras are written on them. These people strongly believe that by doing such things, it will ward off poisonous snake entering their place.

In South India, the snake is identified with Lord Subramanya, Shiva, and Vishnu. In Karnataka, the preparation for the festival starts on the New Moon day of Bhimana Amavasya, five days prior to the festival day of Panchami.  Here live snakes are also worshipped. Every village has a snake deity. People either worship single snakes or nine snakes (Nava Naga). Most people who believe in god in South India also worship the anthill of snakes. Decoration of the anthill is done with turmeric paste. Garlands and flowers are placed on them. Women who have no children worship the anthills placed below the Peepal tree seeking blessings of the god for bestowing them with children.

Nagpur snakes have a special identity in Central India. The name of the city has come from the word Naga which means snake, as the place was infested with snakes. It was the homeland of a set of people called ‘Nagas’. Naga’s are the ones who embraced Buddhism and these people supported it and publicized it throughout India.

The ritual is also observed in Nepal. Changu Narayan Temple is in Katmandu, which has a statue of Garuda. On the Naga Panchami day, the image is said to sweat recalling his great fight with a giant snake. It is believed that people collect the sweat and use it for curing leprosy, though there is no proper information on this.