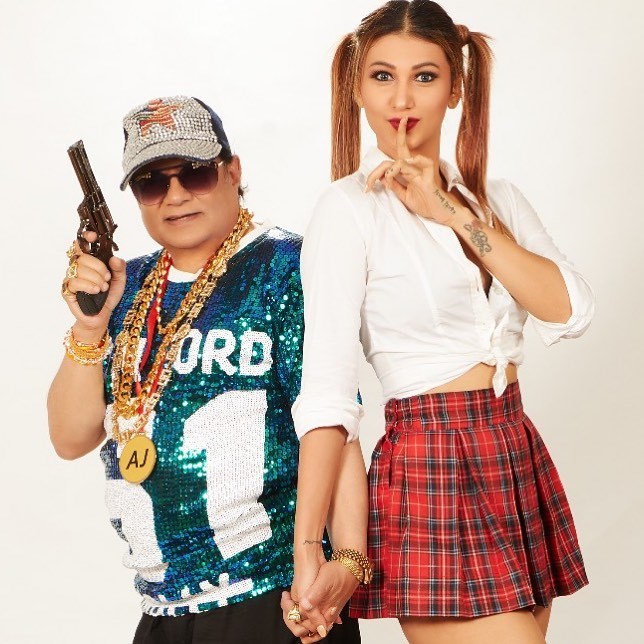 Actress and ‘Bigg Boss 12’ contestant Jasleen Matharu announced that she has resumed shooting of her upcoming film ‘Woh Meri Student Hai’ along with popular bhajan singer Anup Jalota on Wednesday. The film is a take on their real life and Jalota will play a singer, while Jasleen will play his student.

In the poster of the film, Jasleen could be seen wearing a white shirt with a short skirt while he was sporting two pigtails. While Anup Jalota is seen in never-seen-before avatar wearing Tshirt, a cap, sunglasses, jewellery and a gun in his hand.

Jasleen Matharu and Anup Jalota rose to fame as a couple when they entered a Colors reality show ‘Bigg Boss 12’ two years ago. They entered the show as the ‘vichitra couple’ because of their age gap of 37 years.

They had stated on the show that they had been in a relationship for three years, however, they denied any such things after they came out of the show stating that it was all a marketing strategy.

After their stint in the reality show, both then made news last year when they released the news of featuring in a movie together titled ‘Woh Meri Student Hai’.

The film also stars Vinay Dungarpur in a pivotal role and it is written and directed by Jasleen’s father Kesar Matharu.

Bittersweet Trailer Is Out And This One Is Gut-Wrenching

We Owe An Apology To Rhea Chakraborty Says Huma Qureshi