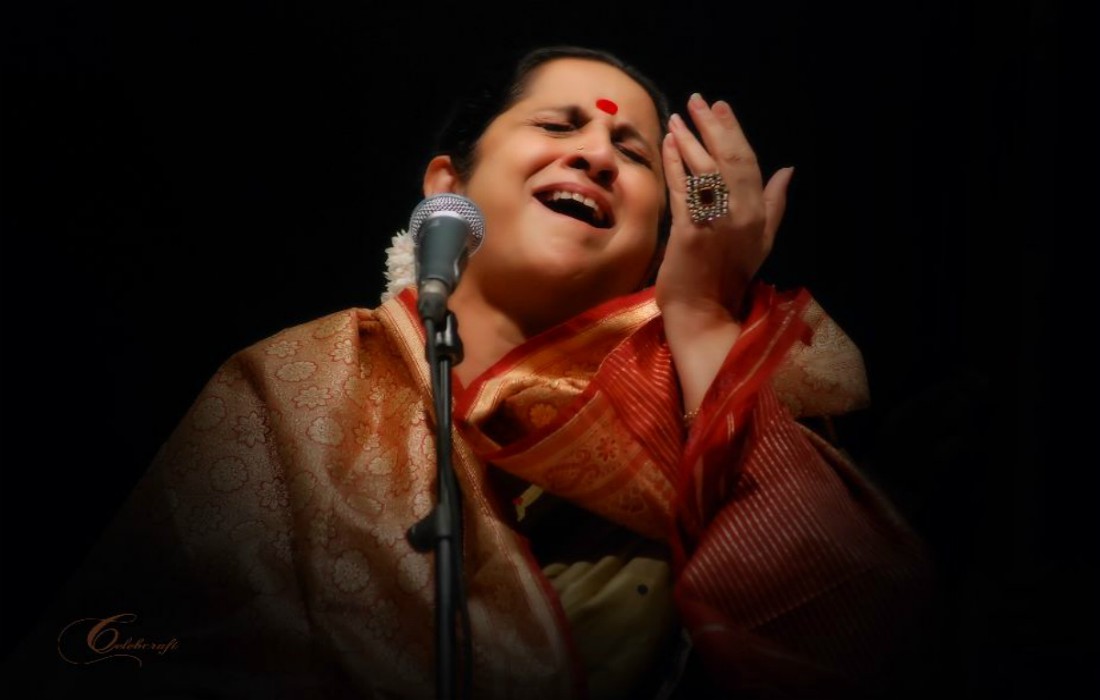 Aruna Sairam is acknowledged by chaste connoisseurs all over classical music audiences, as the reigning queen of classical music in the tradition of South India. She is the authentic representative of a long lineage of women singers from Tanjore, South India, and her repertoire includes rare gems of the Carnatic Trinity of Composers.  Along with them, the lay listener too finds ‘deep, pure emotion and a soulful connect’ with her Abhangs (Spirituals from Central India) and Viruthams (philosophical poems), transporting them to a sense of unity with the universe.

Drawing from her vast knowledge of the pan Indian Traditions, Aruna Sairam is today one of the most important figures in the classical world of Indian music. Arunaji is an esteemed composer, collaborator, humanitarian and speaker.

Ms Sairam has recently been awarded the Sangita Kalanidhi for the year 2018 by the Music Academy, Chennai one of the most prestigious institutions for Carnatic Music in India. Ms Sairam has been decorated with the Padma Shri, one of India’s prestigious civilian awards in the year 2009 for distinguished contributions to Indian culture and society.  She is a recipient of the Sangeet Natak Akademi Award, from India’s premier institution for Music and dance in 2013 from the President of India. The ‘Kalaimamani’ from the Tamilnadu State Government in the year 2007.    Aruna Sairam has been awarded the ‘US Proclamation of Excellence’ wherein the US House of Representatives recognized her musical contribution with a proclamation and a presentation of the US National Flag flown over the Capitol building. She was appointed by the Chief Minister of Tamilnadu as Advisor to the Department of Culture, Tamilnadu on Musical Education.

Aruna Sairam has appeared at prestigious festivals and venues around the world. The BBC Proms invited her to perform at the Royal Albert Hall in 2011 as the first South Indian Classical musician in the Proms’ history of 117 years. The other venues where she has performed include The Royal Festival Hall (London) The Carnegie Hall (New York), Le Theatre de la Ville (Paris), Opera National (Lyons), Royce Hall (Los Angeles), the Fes Festival of World Sacred Music (Morocco), and the Music Academy (Chennai). She has had the rare distinction of performing at the Indian President’s official residence – Rashtrapati Bhavan, at the memorials of former Prime Ministers. She has performed at the Darbar Festival in London, the Oud Festival in Jerusalem in 2018  and Ojai Festival in California, USA, in 2016 and 2017, being the only Carnatic musician to do so in its 70 year history.

After her initial learning from her mother, Rajalakshmi Sethuraman, who was a classical singer, Aruna, at the age of ten, became a disciple of the legendary T. Brinda.  Brinda was the sixth generation torchbearer of a family of renowned musicians of the Tanjore court.

Aruna’s scholarship has led her to undertake various worldwide mentoring programs, including the recent BBC World Routes Academy Project. She has lectured at various prestigious universities across Europe and the US, including Harvard, and was invited by the Indo-French Cultural Exchange Programme as a ‘Guru.’  Her foundation – the Aruna Sairam Foundation – is dedicated to imparting the knowledge of music to young aspiring musicians, creating opportunities for budding artists to perform, and rewarding senior music gurus in the community.

Aruna works towards the musical education of underprivileged students, through the Nadayogam Trust, which she founded in 2011. She has performed extensively to collect funds for cancer care and has created trust funds for families of deceased musicians. She has donated proceeds from her concerts for building the Guruji Medical Centre, providing medical facilities to 150 villages in Tamil Nadu.

Aruna Sairam has also donated proceeds from her concerts and sale of her records to cancer hospitals and to rehabilitating families of musicians who have passed away in their prime.

In June 2015, Aruna was appointed Vice Chairperson of the prestigious Sangeet Natak Akademi, India’s National Academy of Music, Dance and Drama, which rewards excellence in music, dance and drama. The academy honors are conferred by a Board of specialists in different fields of performing arts, and by representatives from different Indian states and Union territories. The Academy works closely with the President of India in all matters regarding the performing arts of the country

The Most Healthiest Breakfast of INDIA! Did You Know?