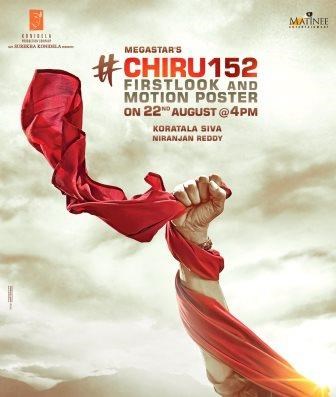 Actor Ram Charan who is known for his versatile acting has crafted his place in Tollywood. The ‘Yevadu’ actor today on his Instagram sharing the poster of the movie stated that the makers are ready with the first look and the motion poster of the film. Ram fueling the excitement of his fans announced the date of his next meet. Till then he has urged his fans to stay safe.

Ram on his Instagram wrote, “We are ready with the first look and motion poster of #Chiru152. Meet you on August 22nd at 4 PM!! Stay [email protected] @chiranjeevikonidela @matineeentertainment”

As per the reports, Chiru 152 marks the first collaboration of Chiranjeevi with director Koratala Siva. The movie will be a commercial entertainer in which the Khaidi No 150 will be essaying a never-seen-before role. Trisha Krishnan, Ileana D’Cruz, and Aishwarya Rai are the frontrunners to play the female leads in the movie.

The technical crew of the film comprises of composer Mani Sharma and cinematographer Thiru and Sreekar Prasad. The film will be produced by Konidela Production Company in association with Matinee Entertainments.