Thank You Riteish, Anupam and Genelia for the Visit Says Rishi Kapoor 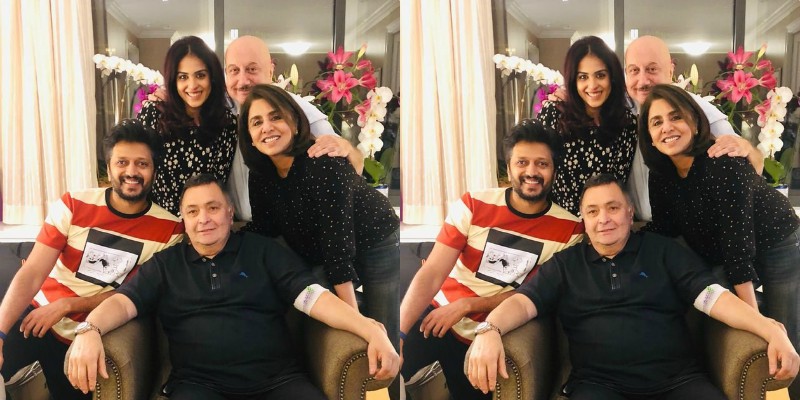 Actor Rishi Kapoor took to Twitter profile and shared a picture with Riteish Deshmukh, Genelia Deshmukh, Anupam Kher and wife Neetu Kapoor. Thanking the Deshmukhs and Anupam Kher for spending the evening with him.

He captioned it, “Thank you @AnupamPKher @Riteishd @geneliad for visiting us. What an inspirational saga Riteish please publish it. Love all of you”

While Rishi shared the picture on Twitter, his wife Neetu Kapoor posted it on her Instagram account with the caption stating they are now counting days to return to their homeland, India.

Her caption read, “Since our countdown has started the best way to celebrate was with ghar ka desi khana with the lovly strong n inspiring Genelia Ritesh and Hamara apna (now he is family)Anupam”.

Rishi Kapoor and Neetu Kapoor’s visitors log in New York also include entries from some of Bollywood’s biggest stars, among them Deepika Padukone, Malaika Arora, Arjun Kapoor and others.

Meanwhile, Rishi Kapoor was last seen in the comedy drama Jhootha Kahin Ka, co-starring Omkar Kapoor and Sunny Singh, which he filmed before leaving for the US.