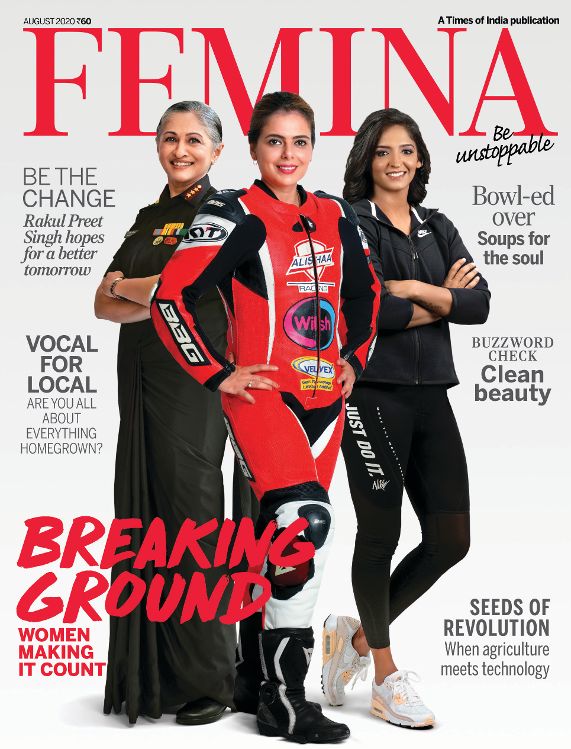 Since last few decades, society has witnessed the uprise of women empowerment in all fields while they have stood up against inequalities in the workforce. Be it Airforce, a cricket match or a racing game, daughters of our country have excelled and triumphed everywhere, bringing nothing but pride to the nation. Celebrating the spirit of such iconoclasts, Femina, India leading women’s brand latest issue features women who are breaking the ground with their outstanding work in different fields.

The cover page of the brand features, Cricketer Harmanpreet Kaur, Lieutenant General Madhuri Kanitkar and Alisha Abdullah- India’s first female superbike champion. These superwomen spoke about their successful journey, and also enlightening the readers of what it was like to be a woman at a time like that.

Cricketer Harmanpreet Kaur spoke about how her childhood goal was just to play cricket. In October 2019, during the series against South Africa, she was the first cricketer for India, male or female, to play in 100 international T20 matches. Further, she spoke in length about how her father was her coach and never stopped her from playing with the boys, her journey as the captain of the Indian team for short-form cricket, and how she led the team to its very first T20 World Cup final earlier this year.

Lieutenant General Madhuri Kanitkar has made it to the top ranks in the Armed forces with her dedication and perseverance and is also the third female Lieutenant General in the history of India. The proud lady spoke about being a soldier. a doctor and a teacher and how her parents taught her and her sister that nothing is impossible. She never faced any gender-biased issue and was taken more seriously everywhere.

India’s first female superbike champion Alisha Abdullah spoke about how racing was in her DNA. This superwoman has been shatter breaking all the records by being India’s first female national H Speed racing champion, super speeding in bike, kart, and car racing sportswoman. Alisha further spoke about how in this male-dominated field she made a place for herself and how her parents always encouraged her and never let her give up. When it comes to racing the young and passionate lady lives by four simple rules dedication, passion, sacrifice, and more importantly, humility.

Femina’s latest August issue also features other inspiring women who broke gender stereotypes across various fields: Smriti Mandhana, Gita Gopinath, Zoya Akhtar, Indra Nooyi, Kiran Bedi and Kiran Mazumdar-Shaw amongst many others. The latest issue of Femina is now available on stands for readers. The August e-issue of Femina is available for FREE for readers on-  https://www.worldwidemedia.in/magazines/femina/august-2020.–