The Year 2020 Why So Negative! Says Zareen Khan 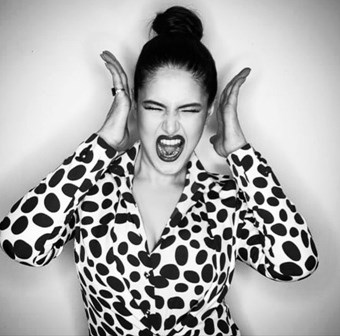 The year 2020 has been quite disturbing for everyone. Coronavirus has brought the whole world at a grinding halt. Staying at home has now become quite tedious and boring. Actor Zareen Khan who is bored to death seems to be searching for good news.

The ‘Hate Story 3’ actor took to her Instagram and shared a monochrome of hers. In the picture, Zareen is seen wearing a white-collar shirt with black polka dots on it. The ‘Wajah Tum Ho’ actor is looking quite overwrought and stressed. As she poses in a way, she is screaming and saying 2020 why so negative!

Zareen Khan, she made her screen debut with a leading role in the 2010 Anil Sharma’s period film Veer co-starring with Salman Khan for which she was nominated for the Zee Cine Award For Best Female Debut.

Khan garnered recognition from her item number Character Dheela in ‘Ready’, which was one of the highest-grossing Bollywood films of 2011. Khan earned commercial success in Bollywood with Sajid Khan’s ‘Housefull 2’.

Meanwhile, on the work front, Zareen Khan will be seen along with Anshuman Jha in the upcoming movie ‘Hum Bhi Akele Tum Bhi Akele’, directed by Harish Vyas.

The film is being readied for a digital release. The film tells the story of a gay man and a lesbian girl on a road trip from Delhi to McLeodganj.