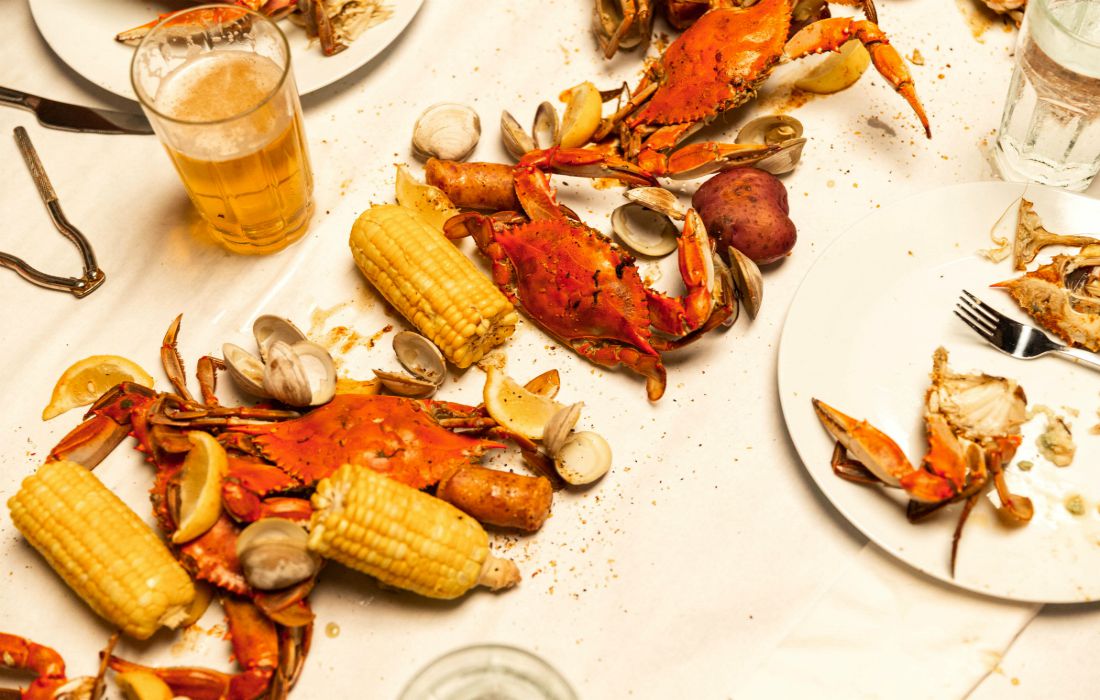 When it comes to Virginia cuisine, our food is as intertwined with history as it is taste. Virginia is known for its southern-style fare including oysters, peanuts, BBQ, country ham, blue crabs, trout, apples, and Brunswick stew. Many recognize these Virginia foods but don’t know the origin or how they became a tradition on our tables.

Learn more about Virginia’s cuisines below and find a Very Virginia Recipe for your next gathering.

Oysters are the oldest documented food in the Commonwealth, dating back to 1607 when the first English settlers at Jamestown survived on oysters pulled from the James River. The Virginia Oyster industry has a rich history that reached its heyday in the 19th century when nearly eight million bushels were harvested in one year.

Today, Virginia is celebrated as the Oyster Capital of the East Coast, with eight different regions harvesting their own distinct flavors. These exceptional tastes range in salinity, creaminess, and sweetness. Unique to Virginia, wine made from grapes grown in the same watershed as oysters pair perfectly – proving that “what grows together, goes together.”

Handsome, plump Virginia peanuts are the largest of the four peanut types grown in the United States. The Virginia Diner in Wakefield is famous for the peanuts it packages and sends around the world. The first known commercial peanut crop of Virginia originated near the town of Waverly in 1842. By 1902, Virginia had quickly become the largest peanut producer, with fourteen of the twenty factories operating in the United States. Virginia’s Peanut Country is concentrated in the coastal and southern regions of the state and can be explored best by following The Salty Southern Route.

Since the 17th century when settlers learned the Native peoples’ art of smoking meats, Virginia country hams began to earn an international reputation. Most famous are Smithfield hams, which, by law, must be cured within Smithfield’s town limits. Ham Biscuits are a staple at any Virginia gathering.

In “Virginia Barbecue: A History”, author Joe Hayes argues that Southern barbecue grew out of Virginia barbecue, which developed not from the Caribbean, as is often believed, but from the Powhatan technique of slow-cooking foods above smoldering coals. Some seasonings, such as vinegar and salt, came from European settlers, while Haynes credits African slaves with using more complex flavorings. Unlike North Carolina, Virginia’s BBQ style and flavors vary by location; you’ll find a tangy vinegar and tomato-mustard blend in the Tidewater area, Worcestershire style sauce in Central Virginia, vinegar and herb-based sauce in the Shenandoah Valley, and sweet tomato-based sauce in Northern Virginia.

Blue Crabs are another delicacy of Virginia’s coastal towns along the Chesapeake Bay and Eastern Shore. Get your hands dirty while picking steamed crabs at waterfront eateries or enjoy lumps of the sweet meat patted into cakes and served on a sandwich. Another favorite is soft shell crabs; chefs lightly batter and fry blue crabs that have shed their hard outer shells to yield captivating dishes.

The brook trout is native to Virginia and was designated as the official fish of the Commonwealth in 1993. Trout thrive in the cooler streams of Virginia’s mountains where seasoned anglers wade in the water to fly fish while surrounded by scenic beauty. Traditional cooking techniques include applewood smoked, cornmeal-crusted, and almondine, which can be found on menu’s in the western part of the state.

Virginia is the sixth-largest apple producing state in the country, with production in the Shenandoah Valley, Southwest, and Central Virginia. Many orchards offer pick-your-own experiences, allowing visitors to pluck apples fresh off the trees. Virginia is known for outstanding apple harvest festivals in the fall, which also showcase delicious products including apple cider, apple sauce, and apple butter. Virginia is also home to a growing hard cider industry, now featuring more than 20 cideries across the state.

Brunswick County, located in Southern Virginia, is the documented birthplace of the hearty meat and vegetable-based Brunswick Stew that has long warmed brisk autumn and winter days. Original recipes were once made with wild game such as rabbits and squirrels, but today’s variations usually include chicken or pork smoked for many hours before making their way into the pot. The famous stew is a staple at many events in the southern region, often made in a huge cast-iron cauldron and stirred with a boat oar.

The rustic beauty of the mountain regions – Blue Ridge Highlands and Heart of Appalachia – attracted settlers from England, Scotland, Germany, Hungary, and Italy who reinterpreted generations-old recipes using crops from their newfound land. Their pioneer activities were fueled by hearty mountain fare, including cornbread and beans, venison, wild turkey, and pumpkins while pickling and canning vegetables helped sustain them through the winters. Chefs in the western part of the state today pay homage to these settlers by serving Appalachian food and using the same centuries-old techniques. Read more about Appalachian-style cuisines.

10 Super Effective Life Hacks That Come Handy During The Lockdown