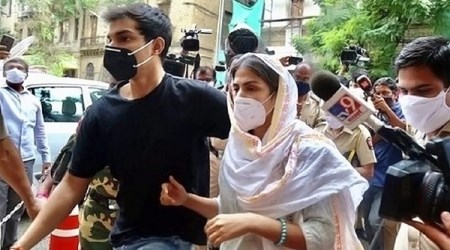 A Special Narcotic Drugs and Psychotropic Substances (NDPS) Act court Tuesday extended actor Rhea Chakraborty’s judicial custody till October 6 in an alleged drugs case filed by the Narcotics Control Bureau (NCB) in connection with actor Sushant Singh Rajput’s death. She and her brother Showik Chakraborty have requested bail from the Bombay High Court, which will take it up on Wednesday.

The 28-year-old actor, who dated Sushant Singh Rajput in the months before his death on June 14, has been accused of organizing drugs for him.

The Narcotics Control Bureau described Rhea Chakraborty as an “active member of a drug syndicate”.

With the NCB opposing her release on bail citing reasons, including ongoing investigation, Chakraborty’s judicial custody will get extended every two weeks till she is granted bail.

On the basis of her three-day questioning earlier this month, the anti-drugs agency has widened its investigations to Bollywood’s drugs links. According to news reports, actors Shraddha Kapoor and Sara Ali Khan, whose names reportedly came up during Rhea Chakraborty’s questioning, may be summoned by the agency later this week.

On Tuesday, the agency summoned top Bollywood A-lister Deepika Padukone’s manager Karishma Prakash and talent agency executive Jaya Saha was also grilled for the second consecutive day. Sushant Singh Rajput’s manager Shruti Modi has also been summoned. These summons have been issued in connection with the first case the agency registered based on the retrieved WhatsApp messages from Rhea Chakraborty’s mobile.

Besides Rhea Chakraborty and her brother Showik Chakraborty, the 15 arrested include two employees of Sushant Singh Rajput and alleged drug dealers who have been linked to Bollywood.

Sushant Singh Rajput, a 34-year-old Bollywood star, was found dead at his Mumbai home on June 14. What began as a suicide investigation became a larger probe by the CBI after the actor’s family accused Rhea Chakraborty of exploiting him for money, medicating him and playing a role in his death.

The drugs inquiry started after WhatsApp chats on Rhea Chakraborty’s phone revealed conversations on buying drugs for the actor.