10+ South Indian Ornaments that are Diminished from the Sight 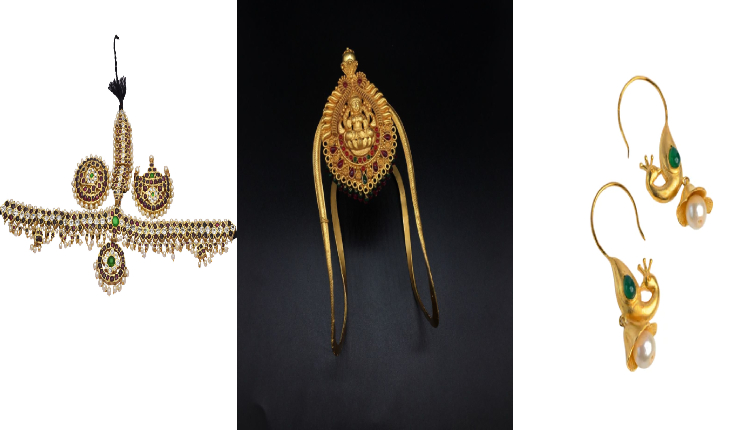 South India has many unique and traditional things that the people used to follow during ancient times. As south Indians mainly focus on keeping up with their culture and traditions, like many other Indians, those traditions used to be a big deal. The modern world has now forgotten most of these traditions mainly in the city.

South Indian ornaments that are mostly diminished from the modern world:

Kireedam: A gold crown filled with gemstones and gems worn by Deities and Kings.

Rakkadi: used in the backhead to retain a clump of long, soft hair that has been spun and knotted.

Surya and Chandra Pirai: Sun and Moon shaped decorative jewels that people wear on their foreheads.

Adanagam: A south Indian ornament used to attach the hair band from the back.

Pattam: An ornament that is tied to the bride and groom’s forehead at the wedding.

Thirugupoo: A jewel that is a spherical ornament with a screw-like rear that was worn in the centre of the backhead.

Kunjam: An ornament that is tied at the end of the braid by a woman. This ornament is said to promote the growth of long hair in women.

You may also like: Tirunelveli’s Brand New Pothys Swarna Mahal

Kadukkan: A little stud ornament with a single stone that is only worn by men.

Olai: These are huge ear studs that were popular in ancient times.

Pampadam: It is a gold earring with hollow balls and lac squares. Old ladies with large ear holes wear them.

Maattal: A south Indian ornament is a chain-shaped jewel that is used to attach to the hair from an earring or nose stud.

Kundalam: These are male and female ear adornments that were popular in our grandparents’ era.

Attigai: It is a necklace-like adornment worn close to the neck by many south Indians.

Maanga Maalai: An Indian ornament that is a long chain shaped like a mango and embellished with stones and diamonds.

Vettrilai Kovai: These are pendants in the shape of betel leaves on a long chain.

Sangili: This is a chain and the chain is entirely made of gold.

Kaarai: It is a Neck ornament that is used on brides a few days before the wedding as a tradition.

Chavadi: A south Indian ornament that has Five levels of chain is called Chavadi.

Pirandai kattai: This one is a pirandai plant chain model that is worn by many women.

Erattai vadam Malai: This is a sort of two-chain link that is still worn by many south Indian women.

Arasala (Arasa ilai): This is a pipal or sacred fig leaf-like jewellery with a silver or gold waist chain for newborns, especially for females.

Aranaal: This south Indian ornament is a chain-shaped one worn at the hip along with the inner side of the sari.

Kai Kappu: These are also known as Kappu, and are plain bangles.

What are your thoughts about all of these south Indian ornaments? Let us know below!

5 Best Types of Clothes to Wear During Summer for Men