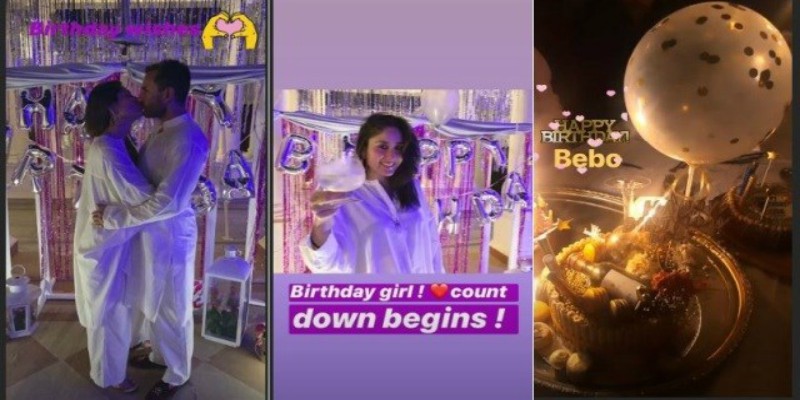 Royal Begum of Bollywood, actress Kareena Kapoor Khan turns a year older and celebrated her birthday at Pataudi Palace with friends and family. The diva clocked her 39th Birthday last night in an epic party.

Actress Karisma Kapoor, who is quite active on social media, shared glimpses of the midnight celebrations which will just keep you glued on to it. Kareena is seen clad in white Kurta and accessorizing it with matching earrings and a bun, the birthday girl set the hearts of her fans fluttering.

Karisma shared a video on her Instagram where Bollywood’s ‘Heroine’ can be seen posing million-dollar smile while cutting the tempting cakes. In the background, we can spot a cheerful husband Saif who can be seen celebrating the moment with great joy.

“Happy birthday my darling Bebo! We love you” Karisma captioned the video.

Meanwhile, the timeless beauty Kareena will next appear alongside Akshay Kumar, Diljit Dosanjh and Kiara Advani in Good News, a comedy-drama about a couple trying to get pregnant.

She has also committed to star in Angrezi Medium, a sequel to the 2017 film, by Homi Adajania, and will portray Mughal princess Jahanara Begum in Karan Johar’s directorial venture, Takht, a historical drama featuring an ensemble cast, including Ranveer Singh, Vicky Kaushal, Alia Bhatt, and Anil Kapoor.

In addition, Kapoor will team with Aamir Khan for the third time in Lal Singh Chaddha, a remake of the American comedy-drama Forrest Gump (1994).

I Went All Out For Made In China Says Rajkummar Rao