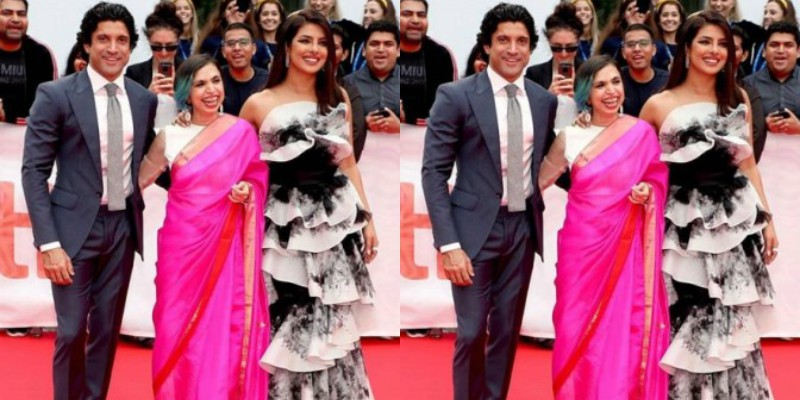 Priyanka Chopra starring ‘The Sky Is Pink’ premiered at the Toronto Film Festival and the actress is nothing but grateful, pens a heartfelt post on her social media profile.

The Sky is Pink is the incredible love story of a couple spanning 25 years, told through the lens of their teenage daughter. She is sassy, sardonic, spunky and suffering from a terminal illness.

The film stars Farhan Akhtar, Zaira Wasim, and Rohit Suresh Saraf. The film is the return of Chopra after a break of three years from Bollywood.

Expressing her joy and gratitude for the world premiere, Priyanka Chopra wrote, “A special night with special people, sharing this labor of love which took us over a year to bring to life. It was an unforgettable experience… Thank you Aditi and Niren for trusting us with your story and for joining us at #TheSkyIsPink world premiere at @tiff_net”

“@shonalibose_ you are the true star of this film! #RonnieScrewvala #SiddharthRoyKapur, as always, it’s been amazing collaborating with you. We’ve done some great films together and this one definitely is up there with the rest of them for me”

The global icon made the grand entrance to the 2019 Toronto Film Festival by wearing a ravishing black and white frill gown ensemble. Priyanka looked absolutely stunning in the couture with sweetheart neckline. The dress also featured a black satin belt which added extra grace to the whole outfit.

‘The Sky Is Pink’ is based on the life of Aisha, who became a motivational speaker after being diagnosed with an immune deficiency order at the age of 13.

It also sheds light on the love story of her parents. The flick will hit the big screens on October 11.