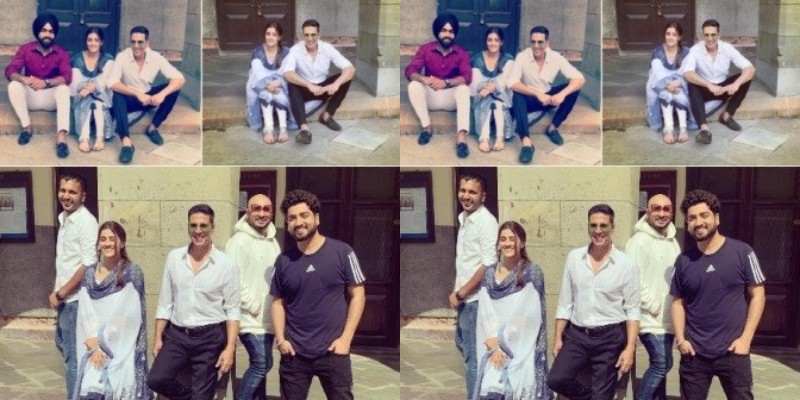 Bollywood diva Kriti Sanon’s Sister Nupur Sanon is all set to debut alongside Akshay Kumar in a special music video. The two-shot for singer B Praak’s new single on Sunday.

Photos of the team have been shared online by the makers taken during the music video’s BTS. The pictures show Kumar posing with Nupur and Ammy at the St. Xavier’s College in Mumbai.

Nupur can be seen in a white and blue kurta-churidaar with her hair tied in a plait. Nupur has earlier shared the screen space with Kriti in a hair-oil commercial.

The gorgeous and highly talented Nupur is not only known as the actress’ sister but is also famous for her beautiful voice which has garnered many fans on YouTube. The music video is written by lyricist Jaani and can be expected to have sad and romantic undertones.

The single is said to be a romantic song written and sung by Jaani B Praak. He also collaborated with Akshay for the song Teri Mitti in Kesari. Other then Akshay and Nupur the music video will also feature Punjabi singer Ammy Virk.

Akshay Kumar, on the other hand, is gearing up for films like Laxmmi Bomb, Good News, Sooryavanshi, Housefull 4 with Kriti Sanon and more.