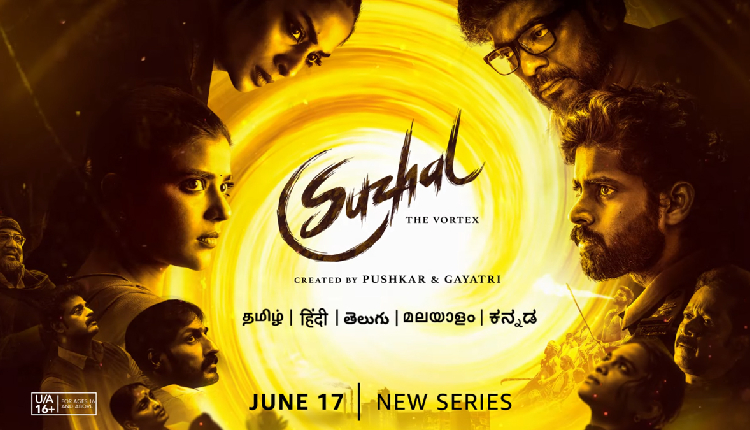 Amazon Prime’s recent Tamil web series has garnered great response from the film fraternity as well as critics. This investigation thriller comes from the Vikram Vedha duo – Pushkar and Gayatri. The story written by them was directed by Bramma and Anucharan M. This suspense drama goes beyond the typical crime investigation and touches on cultural tales too. The series was released on 17th June and is available in sixteen audio languages on Amazon Prime. It includes Latin, Turkish, Arabic, and Japanese languages. The series comprises 8 episodes that are of a 45-50 minute duration. This web series also had a first-of-its-kind laser and water screening for its premiere show. Of late, this gripping series is gathering many positive responses from the social media community. Here let’s see what made ‘Suzhal -The Vortex’ a binge-worthy series that is not to be missed.

You may also like: Kamal Hasan Gifts Rolex, Lexus Car, and Apache Bike After Vikram’s Success

Suzhal has everything a crime thriller needs – a compulsive storyline, an edge-of-the-seat making, and impressive performances. The story revolves around the hidden secrets in a fictional town called Sambaloor in Tamil Nadu. Let’s directly start with the star cast without giving much spoilers on the storyline. One of the major pluses is how the stars perfectly fit the characters they played.

The series has many well-known faces like R.Parthiban, Aishwarya Rajesh, Sriya Reddy, and Kathir. Kathir as Sakkarai gives a striking performance after ‘Pariyerum Perumal’. Another notable performance was given by Thimiru-fame Shriya Reddy as Regina. Sakkarai and Regina played the classic SI and Inspector combo respectively. R. Parthiban (as Shanmugam) and Aishwarya Rajesh (as Nandhini) stole the show in their own way. Likewise, the supporting characters also did their parts perfectly. The surprise show-stealers were Gopica Ramesh playing Nila (Nandhini’s sister) and Fedrick John as Adhisayam (Regina’s son). 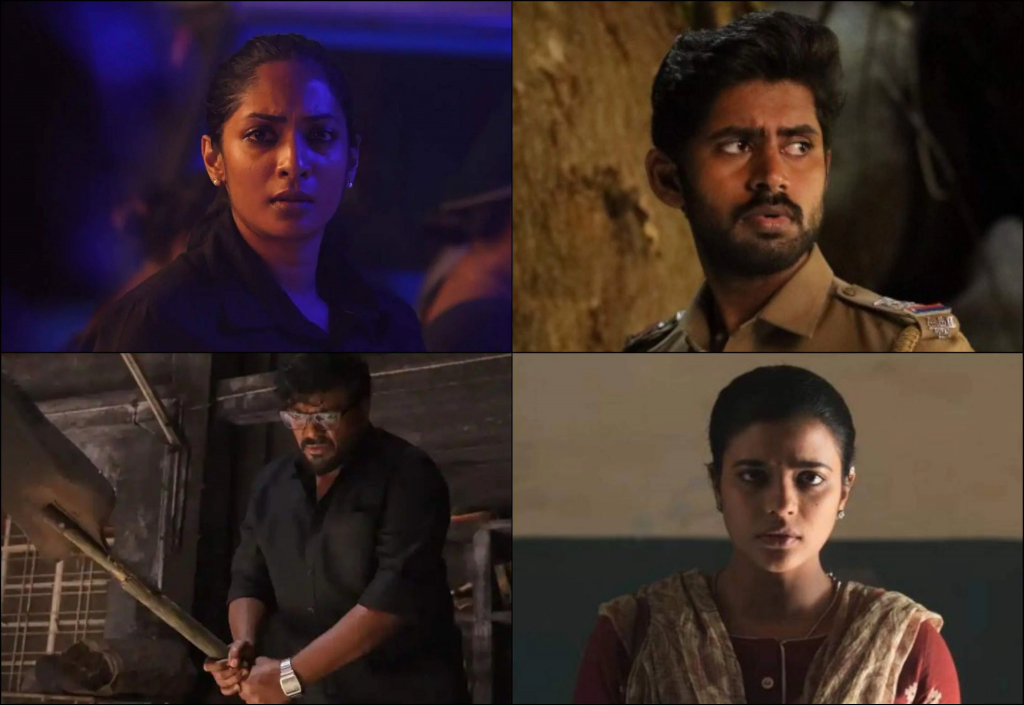 Suzhal also has other noteworthy cast members like Nivedhithaa Sathish, Latha Rao, Harish Uthaman, Santhana Bharathi, and Elango Kumaravel. All their performances were elevated by the technical and musical aspects of the film. The pulsating background score and music were done by the Vikram Vedha fame Sam C.S.
Apart from the star cast, the compelling story also has a much-needed and relevant message to tell the society. Watch till the climax to know that!

Pushkar and Gayatri have a separate fan base in Kollywood. They mentioned that Suzhal was originally written as a full-length film. The story was made into a series considering the depth of each character. The duo were fascinated by the Mayana Kollai festival in the Vellore district which became an inspiration to write this series.

Reactions From Media and Celebrities

“The Hindu” praised its star cast and the effective narration of the layered series. “The Times of India” also commented on the series as an intense investigative series and is a perfect weekend binge-watch stuff. Also, it gave Suzhal a rating of 4/5 stars.
Director Rajamouli took his Twitter handle to praise Pushkar and Gayatri for their amazing work. He phrased his message as follows – “Amazed at what you managed to do!”. Likewise, global star Priyanka Chopra also congratulated the Suzhal team for their work. The ‘Vikram’ movie creator Lokesh Kanagaraj praised the ‘Vikram Vedha’ creators and Sam C.S. for their work. He mentioned it as a cutting-edge series and visual treat and also praised its cast for its performance.

All these accolades and appreciation have made the series reach global audiences. Thus, do not miss watching this binge-worthy series on Amazon Prime. Suzhal – The Vortex is a perfect weekend treat!