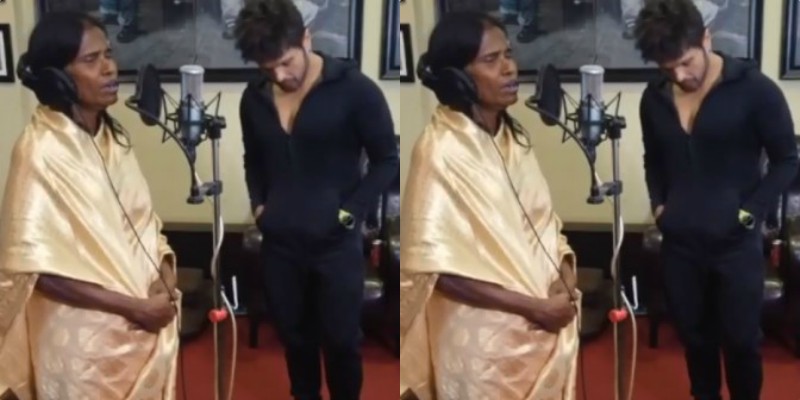 Every now and then internet would discover a hidden gem, one such gem is Ranu Mondal, who was accidentally discovered by someone at a railway station. Her voice got the attention of the world and now music genius Himesh Reshammiya has roped her to croon a track for forthcoming “Happy Hardy And Heer”.

Actor and Composer Himesh Reshammiya feels that Ranu Mondal, who became an Internet sensation after a video of her singing the evergreen Lata Mangeshkar hit, Ek Pyaar Ka Nagma Hai, went viral, has a special gift. He has offered her a song in his upcoming movie “Happy Hardy and Heer”.

Himesh shared a video of Ranu recording in a studio. He captioned it, “Recorded teri meri kahani my new song from happy hardy and heer with the very talented ranu mondal who has a divine voice , all your our dreams can come true if we have the courage to peruse them , a positive attitude can really make dreams come true , thanks for all your love and support”

Ranu Mondal will make an appearance on “Superstar Singer” and meet the kids and judges, including Himesh. The song is titled Teri Meri Kahani.

As for Happy Hardy And Heer, is an upcoming romantic comedy film, produced by Himesh Reshammiya, Deepshikha Deshmukh and Sabita Manakchand. Reshammiya will take up the double-lead role while Sonia Mann, a Punjabi actress will mark her debut in Hindi film as a lead actress.