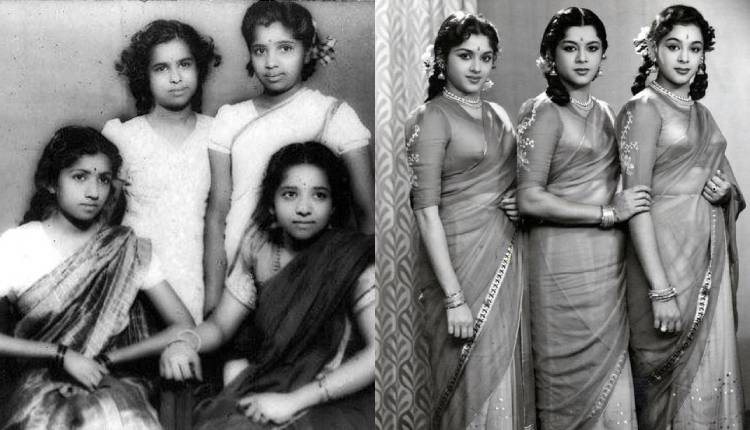 Some well-known sister groups are currently dominating the Indian film industry. That brought to mind some of the legendary celebrity sisters of Indian cinema from the past. So let’s look at a few of them, their work, and just how incredible they were.

You may also like: 6 Sci-fic Movies in Tamil Cinema

Who can forget the well-known Travancore sisters of yesteryear, Lalitha, Padmini, as well as Ragini? The three sister siblings were well-known for their dancing abilities as well as their on-screen performances in movies in a variety of languages, such as Malayalam, Tamil, Telugu, Kannada, as well as Hindi. The most well-known of the three siblings, Padmini is most known for her roles in the Bollywood movies Jis Desh Mein Ganga Behti Hai, Kalpana, Kaajal, and Mera Naam Joker. Lalitha, the eldest sister, only made an appearance in one Hindi movie, Kalpana, but Ragini appeared in movies like Mr X, Amar Deep, Shikari, Kinare Kinare, and others.

The Dehlavi sisters, comprising Madhubala, Chanchal, & Madhur, were entertainers who appeared in the same as well as other films. They were born to parents Ataullah Khan and Meher Jahan Begum. Madhubala, the most well-known of the three, began appearing in movies at a very young age to help her family financially. Madhubala, the fifth of her family’s eleven children, had her acting debut as a young child in Basant in 1942 before moving on to lead roles in movies like Mahal (1949), Chalti Ka Naam Gaadi (1958), Mughal-E-Azam (1960), and so on.

Chanchal, the younger sister of Madhubala, was a well-known actress who appeared in movies like Pardes (1950), Naata (1955), Mother India (1957), as well as Jhumroo (1961). The 1976 film Saanjhi, starring Vikram and Kabir Bedi, was supposed to introduce the youngest sister Madhur. However, the movie was never distributed. Later, she starred alongside Vikram in the 1981 movie Sangdill, and she provided vocals for a track in the contentious movie Kissaa Kursee Kaa (1977).

Another well-known sister trio from Indian cinema, Meghna Reddy, Sushama Reddy, and Sameera Reddy, had a brief film career. Meghna Reddy, the oldest sister, was a renowned VJ, supermodel, as well as actress who had been in the movie Auroville 316. Sushama Reddy, the middle sister, had previously worked as a model and appeared in the movies Chocolate: Deep Dark Secrets, Don: The Chase Begins Again, as well as Chup Chup Ke. Dus Tola, a 2010 Hindi film, was co-produced by Sushma. Sameera Reddy, the youngest sister, acted primarily in Hindi films, as well as a few Tamil, Telugu, and Bengali ones. Her well-known Hindi films include Race, De Dhana Dhan, Tezz, Musafir, as well as Race.

Many people may not be aware of the Irani siblings Menka, Daisy, and Honey, who are among the most illustrious and venerable on-screen sibling groups in Bollywood. Menka Irani, who is more known for her child actor roles in movies, appeared in a handful of them, notably Bachpan (1963). She later wed actor-director Kamran Khan, with whom she had two children: Farah Khan and Sajid Khan.

Daisy Irani, who was also well-known when she was younger, has appeared in movies such as Bandish, Jagte Raho, Bhai Bhai, as well as Naya Daur. She is renowned for her role as Boman Irani’s mother in the films Shirin Farhad Ki Toh Nikal Padi as well as Happy New Year. Before becoming married to Javed Akhtar in 1972 and transitioning into the screenplay and directing, Honey Irani too performed as a child actor in films like Pyar Ki Pyas and Zameen Ke Tare. She has two children, Farhan and Zoya Akhtar who are pretty famous nowadays.

We will be delighted to have your thoughts and feedback. Please write to us at [email protected]dz.com

The Secrets of Ajantha and Ellora caves