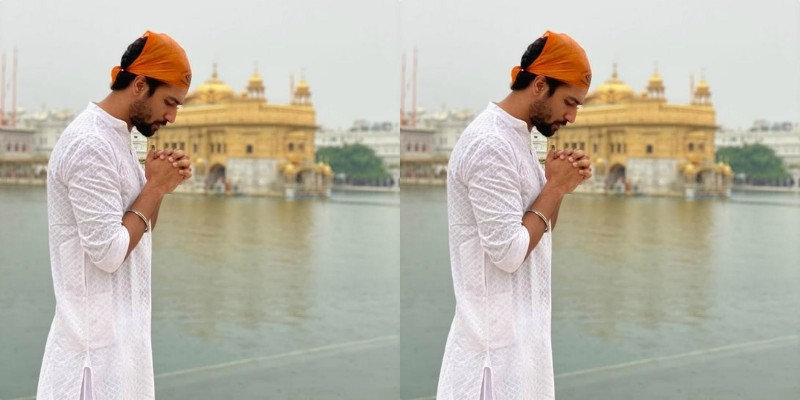 Dapper actor Vicky Kaushal is one busy actor, ever since his URI turned a massive hit at the box-office. The actor is collaborating with ace filmmaker Shoojit Sircar for forthcoming ‘Sardar Udham Singh’ and has kick-started the shoot of the film with the blessings from Golden Temple.

Sardar Udham Singh’s first look grabbed everyone’s attention since it was releases, now, the young talented actor has headed to Punjab to seek blessing at the Golden Temple before he starts shooting for the film.

Taking to Instagram, Vicky shared a picture of himself praying at the Golden Temple dressed in a white kurta. He captioned this picture as “Babaji, mehr bakshyo.  #SardarUdhamSingh here we go!”

The first schedule of the film has been completed in April this year, the makers along with the cast and crew of the film will be commencing their second schedule in October as they will be shooting in Russia, United Kingdom, Europe and India.

The film is based on freedom fighter Udham Singh, a revolutionary belonging to the Ghadar Party best known for his assassination in London of Michael O’ Dwyer, the former lieutenant governor of the Punjab in India, on 13 March 1940. The assassination was in revenge for the Jallianwala Bagh massacre in Amritsar in 1919.

Meanwhile, Vicky has his kitty full with some interesting projects like ‘Takht’, ‘Bhoot Part One: the Haunted Ship’ and Meghna Gulzar’s film on Field Marshal Sam Manekshaw.