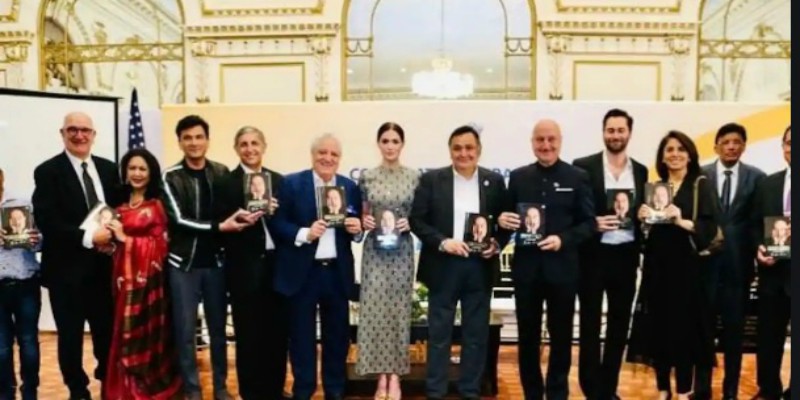 Anupam Kher launched his autobiography titled ‘Lessons Life Taught Me Unknowingly’ on Friday. The book was unveiled by Rishi Kapoor in New York.

The veteran actor has worked in over 500 films and has no intention of slowing down, he is currently shooting for New Amsterdam and was last seen in The Accidental Prime Minister and One Day: Justice Delivered in 2019.

He shared pictures from the celebration on social media and wrote, “It was pure joy, love, warmth & happiness at the launch of my autobiography in @IndiainNewYork. Thank you @chintskap for your magnanimity. You are a real-life HERO too. #NeetuKapoor for your grace. #RyanEggold @janeymontgomery for your love.#LessonsLifeTaughtMeUnknowingly”

The autobiography was launched at a special event at the Consulate General of India in New York. Kher was accompanied by his NBC’s show New Amsterdam’s co-stars, Rishi Kapoor and his wife Neetu Kapoor.  ‘Lessons Life Taught Me Unknowingly’ is said to give a detailed account of his experience and learning’s as an actor over the course of the ups and downs in his career.

He even shared some glimpse from the book on his Instagram, he even shared throwback pictures on his account with Aamir Khan and more while reminiscing the old days.

He had captioned the image as, “Found an interesting old working still from the shooting of Inder Kumar’s #Dil. Movie released almost 30years back. The scene was shot on the Juhu Beach. We had not yet started taking ourselves seriously. Life was innocent. What do think Dear Aamir is thinking here? Will be interesting to know your thoughts. #throwback#LessonsLifeTaughtMeUnknowingly#Autobiography””

Anupam Kher’s book Lessons Life Taught Me Unknowingly released in India on August 5. It will be released in the US on October 15 this year.