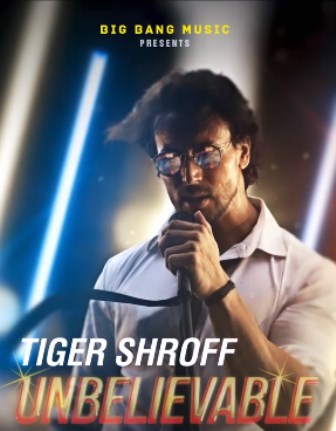 The dancing, acting, and kicking triple threat of Bollywood, actor Tiger Shroff adds another feather in his cap, turn signer, and announces his debut track “Unbelievable”.

Tiger Shroff took to his social media and dropped the motion poster of his debut song. He captioned it, “Always wanted to sing and dance to my own song, but never really had the courage to take it forward. Excited to share this humble effort with you soon #YouAreUnbelievable #TeaserOutSoon @bgbngmusic @hashtagGaurav @iamavitesh #dgmayne @punitdmalhotra @dop_santha”

Filmmaker Punit Malhotra, who worked with Tiger in Student of the Year 2, has directed the music video with choreography by Paresh. The song is produced by Big Bang Music, the track has been penned by DG Mayne and Avitesh, with Tiger lending the vocals.

On the acting front, Tiger was most recently seen in Baaghi 3, which released countrywide in March this year.

Next, Tiger is prepping for Heropanti 2, the sequel to his debut film Heropanti. The film will be helmed by Ahmed Khan and directed by Sajid Nadiadwala. The female lead for the film is yet to be announced.