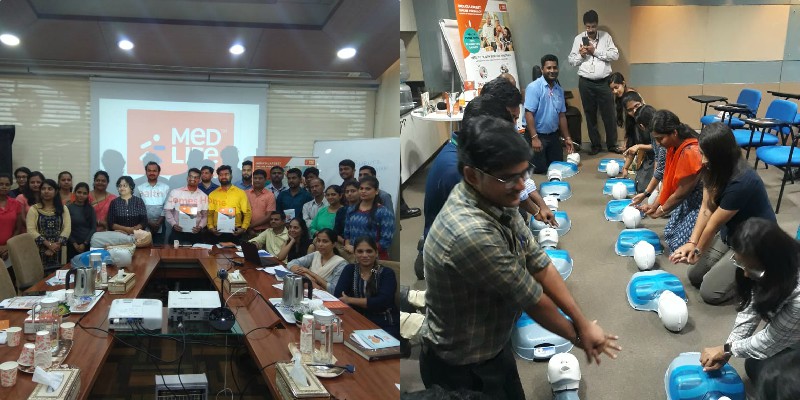 Medlife launches #BecauseHeartMatters, a campaign aimed at educating the public on the importance of cardiopulmonary resuscitation (CPR)

The brand has tied up with National NGO, the Heart Care Foundation of India (HCFI) to train over 2000 people in 5 Indian cities on this basic lifesaving technique

Bangalore, 23rd September 2019: Medlife, India’s largest e-health company with three business verticals including pharmacy, diagnostics and e-consultation has launched a campaign called #BecauseHeartMatters ahead of the World Heart Day. As part of this campaign, Medlife will conduct CPR training sessions across 5 major cities in India in association with leading non-profit organization the Heart Care Foundation of India (HCFI).

An integrated digital campaign has also been launched on Facebook as a part of which, an augmented reality (AR) filter has been created. This will help people understand the CPR technique in an engaging and interactive manner. Developed in collaboration with Facebook and Bangalore based creative tech agency alive now, Medlife aims to reach out to over 35 Million Indians through the interactive filter.

Heart diseases are the leading cause of deaths in India and claim about 2.8 million lives each year.[1] Timely interventions such as CPR to revive someone after a sudden cardiac arrest can help save many lives. However, a recent survey indicates that about 98% people are not trained in this basic technique. Through the campaign, trending on Facebook as #BecauseHeartMatters, Medlife aims to raise awareness about the importance of providing the right response to sudden cardiac arrest patients in a timely manner through CPR.

Over 50 training sessions will be conducted across Mumbai, Delhi, Bangalore, Hyderabad and Pune at over 30 corporate organizations including Reliance General Insurance, Titan, AO Smith, LIC, Bajaj Allianz and others. Over 2000 people are expected to undergo training in the lifesaving procedure and over 35 Million people will be reached online.

Speaking about this, Meera Iyer, Chief Marketing Officer, Medlife, said, “Medlife’s vision is to help improve health outcomes for a billion Indians by making healthcare simple, accessible and personal. In this light, the campaign on CPR training assumes importance since sudden cardiac arrest is a condition that can affect anyone, anytime and anywhere. CPR can be performed by anyone and we aim to educate people about this through both our offline and digital campaigns.”

Adding further, Padma Shri Awardee, Dr KK Aggarwal, President, Heart Care Foundation of India (HCFI), said, “We are happy to join hands with Medlife for conducting CPR training at such a large scale. Although CPR is a lifesaving technique, not many people are aware of how to carry out the procedure. Learning CPR is real voluntary work. It is a simple measure that can save lives when two minutes can also be the deciding factor between life and death during a sudden cardiac arrest. We hope that the campaign will create the much-needed awareness about the importance of CPR and encourage people to further educate others too.”

Medlife continually conducts campaigns to raise awareness among the masses about preventive and curative health. During the recent elections they launched a campaign called #HealthForTheNation where they encouraged people to vote not just for a new government but also for the nation’s health and well-being. They also released health scorecards for 29 Indian states which revealed startling gaps in doctor-to-patient ratios, incidence of diseases etc.

Medlife has a customer-centric approach and offers genuine healthcare products and services from authorized dealers at discounted prices, cashback, and referral discounts. Since its inception in November 2014, Medlife has scaled rapidly to become the first e-pharmacy to clock 1000-crore revenue run rate. It currently services 29 states, 4,000 cities and 25,000 pin codes in India fulfilling over 25,000 deliveries daily.

Medlife operates its medicine delivery service through 40 fulfillment centers and 3 large regional hubs in 22 cities. Its USPs include a transparent inventory-led model and the steadfast conviction to sell drugs only against a valid doctor’s prescription. Medlife has one national and five regional laboratories and over 350 phlebotomists helping bring diagnostics to patients’ homes. It has also launched its e-consultation service after acquiring Eclinic247 last year.

Meditation: 8 Lifestyle Changes That Occur When You Start Doing It

Why You Should Ditch Using Mobiles in Restroom?