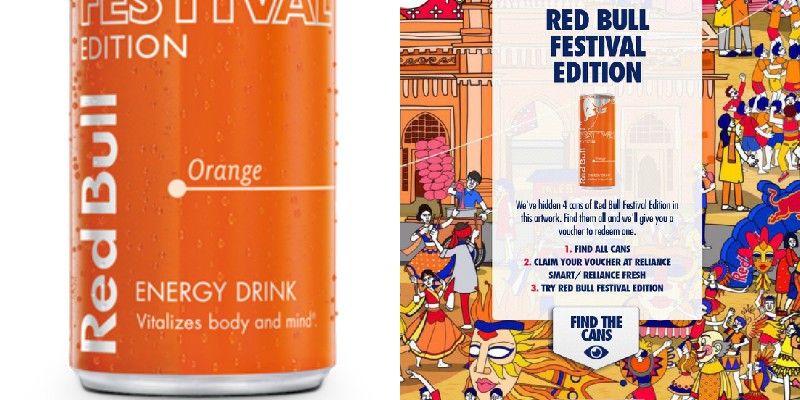 ~ Same wings – Different taste! If you crave the taste of orange, the Red Bull Festival Edition is for you

~ The Taste of Orange, The Wings of Red Bull

10th September 2019: Red Bull India has launched a limited festival edition can to elevate the upcoming festival spirit. The Festival Edition Can comes with a refreshing taste of orange; making it a perfect on-the-go drink to charge you up and give wings while you are busy with your festivities.

Also, in celebration of the festival season, the beloved energy drink giant has created an incredibly enticing contest #SpotTheCans. Consumers will have to click on https://spotthecan.redbull.com/ and spot 4 hidden Red Bull Festival Edition cans in an impressive piece of artwork. Upon finding, one can redeem the voucher at the nearest Reliance Fresh and Reliance Smart.

Continuing to search for new and innovative ways to entice its consumers, the energy drink giant will also host engaging on-ground, in-store and on campus activations in the coming months.

The Red Bull Festival Edition is priced at INR 99 for 250 ml and are available nationally across select towns from 1st September.

Same wings – Different taste! If you crave the taste of orange, the Red Bull Festival Edition is for you.

Inspired by functional drinks from the Far East, Dietrich Mateschitz founded Red Bull in the mid 1980’s. He created the formula of Red Bull Energy Drink and developed the unique marketing concept of Red Bull. In 1987, on April 1, Red Bull Energy Drink was sold for the very first time in its home market Austria. This was not only the launch of a completely new product, in fact it was the birth of a totally new product category. Today Red Bull is available in 171 countries and over 75 billion cans of Red Bull have been consumed so far.

Is it okay to use Air Coolers?