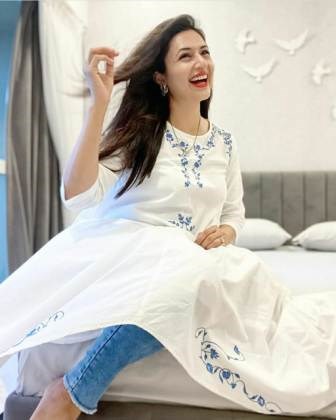 Kicking off morning blues with her million-dollar smile, television actor Divyanka Tripathi Dahiya on Wednesday posted a picture of herself. In the picture, she is seen sitting and laughing her heart out.

The ‘Yeh Hai Mohabbatein’ actor took to her Instagram handle and penned down a few lines.  In her post Divyanka resembling humans as a bird stated that one should not get caged in perfection. In fact, a person should dare to fall and learn to fly.

The Instagram feed of Divyanka read, “Why get caged in perfection when you have wings? Dare to fall & learn to fly.”

About Divyanka Tripathi Dahiya, she is known for playing the dual roles in Zee TV’s Banoo Main Teri Dulhann and the character of Dr. Ishita Bhalla in Star Plus’s Ye Hai Mohabbatein. She was also seen in the lifestyle and entertainment show ‘The Greedy closet’.

Divyanka is one of the highly followed celebrities of the Indian Television Industry on social media. The actress is also quite active on social media does a lot of live chats and frequently posts videos and photos. She is also known for being vocal about societal problems. The ‘Yeh Hai Mohabbatein’ actor is not afraid to speak her mind out.