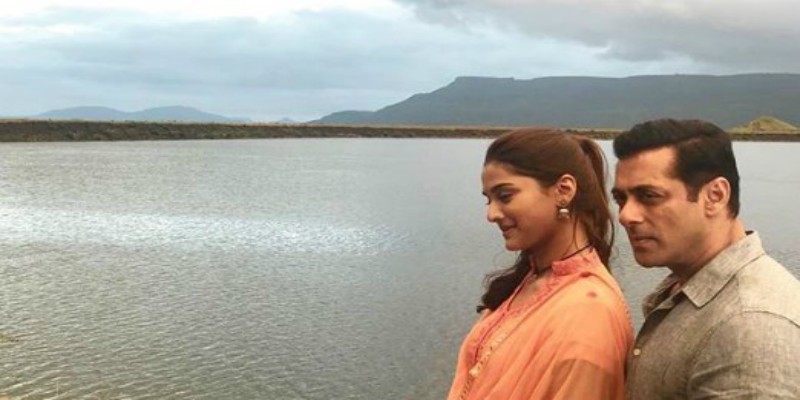 Salman Khan took to his Instagram to share the first look with his Dabangg 3 co-star Saiee Manjrekar, Daughter of actor Mahesh Manjrekar, Saiee will be making her debut alongside Salman Khan as his love interest from younger days

Salman captioned the picture, “On location #dabangg3 . . . @saieemmanjrekar.” The two can be seen overlooking a water body merging with the skyline. Salman can be seen donning an off-white shirt while Saiee sports a traditional look with light orange colored top, small nosering and jhumkas. She reportedly has shot all major portions of her part which include a song with Salman.

Dabangg 3 third installment on the hit franchise will bring back Salman Khan’s family from the original. While Dimple Kapadia played his mother’s role, late Vinod Khanna who played his father will be replaced by Pramod Khanna. Arbaaz will be seen as his brother Makkhi and Mahie Gill plays the role of Makkhi’s wife. South Star Sudeep has been roped in as the villain for Dabangg 3.

Saiee’s father Mahesh Manjrekar is already a part of the franchise. He was seen as the alcoholic father of Sonakshi Sinha’s character Rajjo. Filmmaker-choreographer-actor Prabhudheva will be helming the director’s hat for the upcoming third film.

Dabangg 3 is scheduled to hit cinema houses on December 20