Why Hot Soups For Hot Summers? 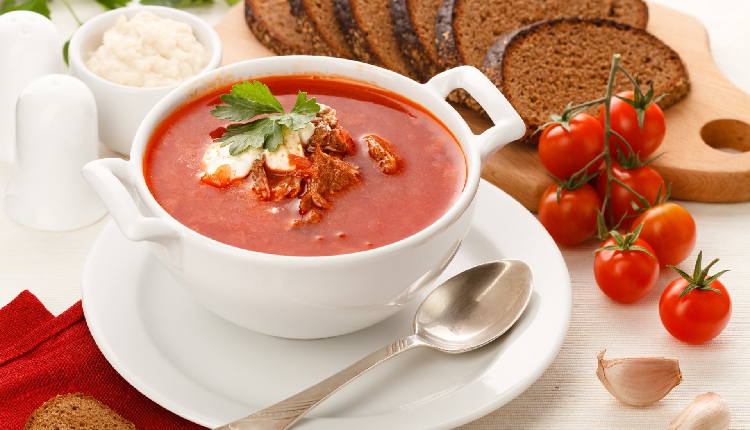 People would tend to say no to hot and tasty soups but would go for ice-cool teas or coffee or anything which would run down their tummy and makes them feel the chillness both internally and externally. But there still foods which could happily offer you the boost to beat the heat thereby cooling down your internal system of the body. You really have to think twice before pushing away a bowl of evaporating and delicious soups. They come with flavors and different kinds with various nutritious ingredients which would not only cool down your body but also infuse your body with great nutrients. So, let’s check out the following benefits of consuming healthy soups this summer.

CHILL DOWN THE BODY WITH THE WARMING SIP: While most people tempt to have ice cream, searching for the AC remote to switch it on as soon as entering the room and gulping down a bottle of chill water, you could cool down your body with hot food. If you wonder whether the hot foods could work for the heat temperature, then you must give it a try at least by now. Well, places such as Southeast Asia, India, and the Caribbean would go for hot foods especially soups and stews which could seemingly help them during the summers. So, you gotta a reason to add it to your diet.

BEAT THE HEAT WITH THE HEAT: Your body does not work well by the formula of heat and cold but it does work well with heat and heat. When you have anything hot, your body would respond to it since your brain would send the signal to your body to cool down at once the internal temperature regulators stimulated. This is good for your circulation and you would even sweat a little which is great. That’s how your body cools down. So, try beating the heat with the heat of the soup as it would keep you in balance.

THE CHOICE OF SEASONAL VEGGIES AND FRUITS: You might get a variety of seasonal veggies and fruits for the preparation of warming soup. You have an important reason to incorporate hot soups to diet than summer which is the current pandemic situation. Since soups contain nutritious ingredients such as fruits, veggies, and pepper, they could help your body to be more immune against the infection.

TOTALLY GOOD FOR YOU: As already mentioned, soups make it the right way to your bowl as it is an excellent food to have. This is because it is made with veggies such as broccoli, spinach, kale, tomatoes, carrots, and others. The rich source of vitamins and minerals including iron, folate, magnesium, and manganese is served right before. This perfect blending of deliciousness and healthiness is obviously a gift from nature.

GIVE YOURSELF THE TREAT OF CHILLED SOUP: And if you are convinced about having hot soups on hot and sunny days and you hate it to do so, you could go for some amazing choices of chilled soups including gazpacho, vichyssoise, papa al Pomodoro and much more from around the world to add in your summer menu. Since soups are made with raw veggies, they are beyond healthy and so just go for it.

6 Top Benefits of Wet Wipes You Should Know